The Physics Department Assembly addresses, discusses and decides on current, day-to-day problems and matters such as study structure, doctorates, new profs, research and teaching priorities and much more. Decisions usually have to be confirmed by the Faculty Council. It consists of the group of university teachers (which generally means all profs), five representatives of the group of academic staff, two representatives of non-academic staff and five student-representatives. The head of the committee is the department spokesperson.

More or less the departmental assembly for Maths, but without a permanent student member. That means we are only allowed in the non-public part.

The StuZuKo ensures the distribution of study grants at department level. The basis for this is provided by applications for grants, which can be submitted by every prof and student and which must be fully processed by the commission.
So if you have ideas on how to use funds to improve the study situation, feel free to email them to us and we will help you with the application!
The commission is responsible for ensuring that the distribution process is carried out correctly.
It is made up of two professors and two students plus representatives (the students cannot be outvoted!) and is appointed by the Faculty Council.

The Board of Studies is the central committee for all topics related to studying and teaching (organisation and implementation of teaching, evaluation and further development of study programmes, information and coordination between teachers and students) and meets at least once a semester.
Formally, it is part of the university’s internal system for quality management (QM) and is appointed by the Department Assembly/Council.

When a professorial position becomes vacant, a committee is set up to see to it that the position is filled again. In addition to the bigwigs and professors, the committee also includes representatives of the academic middle class (i.e. staff, doctoral students, etc.) and two students. If everything goes smoothly, the appointment procedure takes about a year: the position is advertised, the applications are reviewed and the best applicants are invited to an interview including a (usually public) lecture and teaching sample. Then the commission draws up a list of proposed appointments, which is passed on to the university president via the senate. Only the president can appoint new professors. Theoretically, he could ignore the list or the order of candidates completely, but generally he sticks to it. The list has several placements because not every prof takes the job.
Our job as students is to make sure that the candidates on the list can deliver good teaching and are generally student-friendly.

Political engagement is not limited to committees that meet and make decisions exclusively at the department. We also maintain contact beyond the boundaries of the department and our faculty.
To give you an overview, here is a “map” of the most important committees. You can see our FSI at the bottom left. 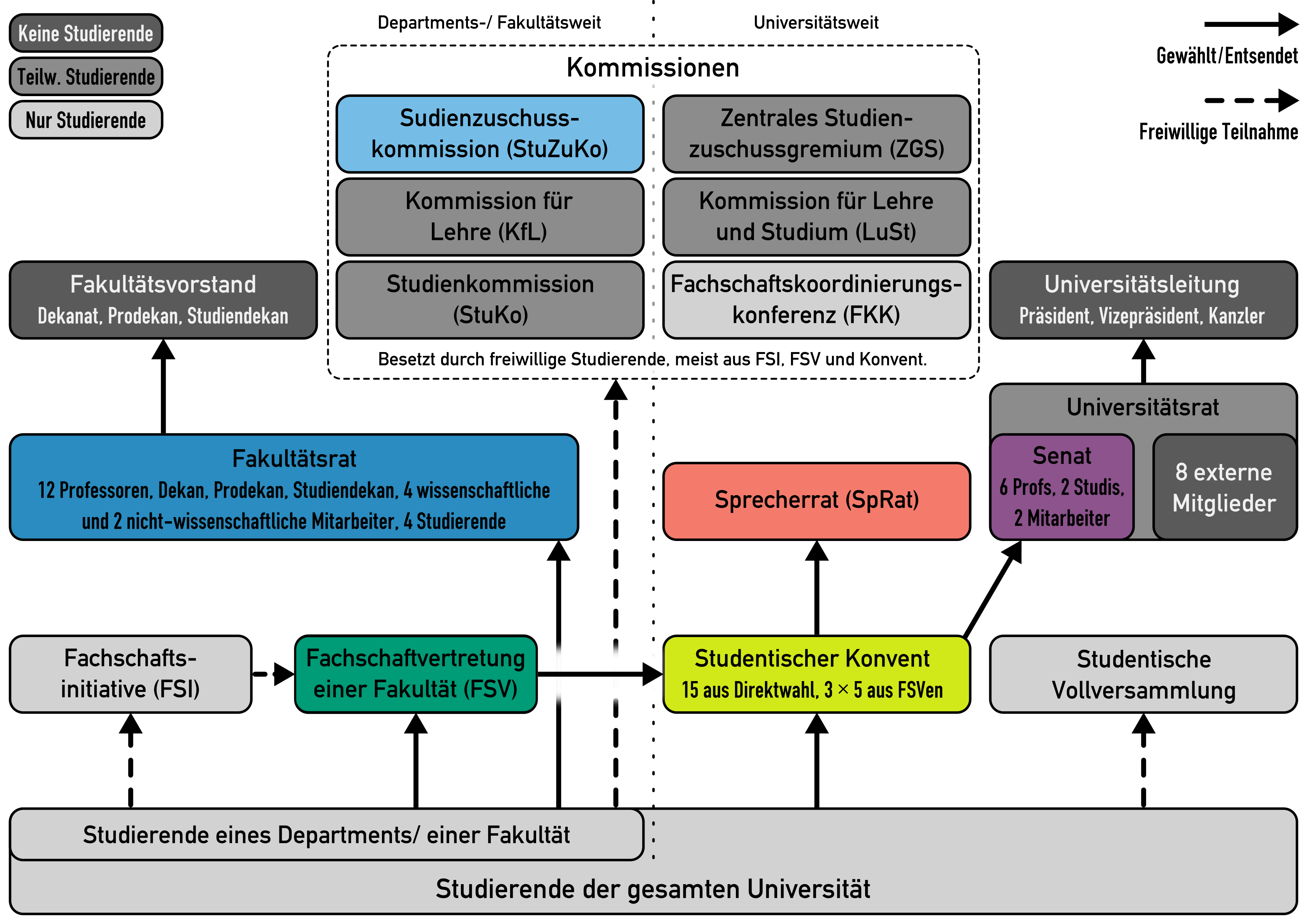 The FSV is the lowest elected – and thus official – student body at the University. The number of student representatives in the FSV depends on the number of students enrolled at the respective faculty. In the case of the Faculty of Natural Sciences, there are currently ten representatives.
The FSV takes care of everything that concerns the whole faculty, for example, better networking between the individual departments or supporting the FSIs of the faculty in their work. In addition, the FSV receives funds from the university, which it distributes to FSIs and students of the faculty according to need.

The FakRat is composed of twelve professors, six research assistants and four students with voting rights, who are elected by the students of the NatFak. It makes final decisions for the Faculty of Science. These include the approval of funds, the establishment or planning of new study programmes and changes to your examination regulations. Many decisions have already been discussed in the departments and are confirmed in the FakRat before being finally passed in the Senate. In addition, the FakRat sets up some committees, such as study committees or examination boards, as well as committees in which students are involved.

The Studierendenvertretung (Stuve) is something like the student parliament at the university, whose representatives are newly elected at the annual university elections. It sees itself as a kind of umbrella organisation for all organisations involved in university politics and provides the platform for committee work above the departmental level:

The Sprecher*innenrat (Sprat) is the executive body of the student Konvent. In principle, it is made up of six student members who are appointed by the Konvent. In addition to these six representatives, the extended Sprat also includes the two Konvent Chairpersons. The Sprat is happy to help you with room requests for university purposes or problems with BaföG, student accommodation, …

The Konvent is the University’s highest purely student body. It is made up of 15 directly elected representatives and 5×3 representatives delegated from the FSVs.
As an opinion-forming body, it takes and discusses positions on (university intern) political issues on behalf of all students at the university. The resulting tasks, contents and topics are passed on to working groups and units (accessible to all). They then take care of their execution. Another important task is the election and delegation of representatives to decisive bodies, such as the Sprecher*innenrat or the Senat.

The Senat is the highest body of the University with student participation. It is composed of six professors with voting rights, one non-scientific staff member and two student representatives.
Its tasks include the final appointment of professors, the establishment/modification of study programmes and the decision on legislation to be enacted. It also has the right to propose candidates for important university positions.

In addition to these decision-making bodies, there are a number of other committees, such as the Commission for Computer Facilities and that for the distribution of study grants at the university. Everyone can apply to the Convention to be a representative for these committees if you are interested. New heads are always welcome. You can find out which committees exist at FAU here.